Sad news in the world of Fashion: it has been confirmed that talented designer Valentino Garavani, who has dressed the world's most glamorous women for decades, will retire in January 2008 . The 75-year-old fashion icon had celebrated his 45 years in the industry in July with a lavish three day party in Rome. Since the announcement of his resignations from the Fashion House of Valentino, a company which he co-founded in 1960 with Giancarlo Giammetti, it has only being speculated who his successor will be.
From humble beginnings as the son of an electrical supply store owner in northern Italy, Valentino became an international force in fashion, designing legendary pieces from couture to cruise wear for his A-list clientele. He credits his mother for giving him a taste for fashion: "My mother was always saying 'How did I come to have a son who only wants the most expensive things?'," then he adds: "I was 13 or 14 years old and she used to give me money so I could have made-to-measure shoes.". After winning a scholarship to the prestigious Chambre Syndicale couture school in Paris he left Italy at the age of 17 , then worked in the fashion house of Jean Desses in the 1950s, and later served as an assistant at Guy Laroche. Valentino opened his first atelier in 1959 in Rome, and designed his first collection in 1960, but with his 1962 line presented in Florence, he knew he had hit it big.
Valentino and his partner sold the fashion label in 1998 , and the Valentino Fashion Group was recently bought by British investment group Permira who also owns other fashion labels as Hugo Boss, M Missoni and Marlboro Classics. When asked about the future of his company, the legendary couturier answered: "I realize the house that carries my name will go through some changes, but I wish to think that the team of designers of the various lines - some of whom have been working by my side for many years - will make me proud of Valentino's products". So, what will it be of this amazing fashion designer who had once declared that " red is the only color after black and white"? Well, he might retire, however he doesn't have any intention of slowing down: "My future will be filled with new interests and challenges" he says, "Some may be linked to fashion, 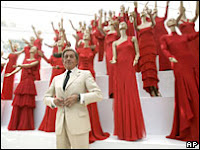 as I have a strong desire to create and support institutions to promote the study of fashion design, and to preserve the history of the art of fashion. It will be a marvelous continuation of this amazing adventure that I had the privilege to have. Even as a young boy, my passion was to design, and I have been very lucky to be able to do what I have loved all my life". Valentino’s final two run-way fashion shows are his Ready-to-Wear collection to be shown in Paris this October and a last collection of Haute Couture to be shown in Paris in January 2008. Posted by beautybyella at 3:41 PM