How to Tie a Tie

There are many times in a man's life where it's necessary to wear a tie. Whether it's for a job interview or your wedding day, knowing how to tie a knot on a tie is a must for every guy. Start with these step-by-step instructions for a simple knot. Get a sharp-looking tie, a mirror and some patience, follow the steps and you too can become proficient at tying a tie for maximum class, professionalism, and style.

Instructions on how to tie a Necktie:

Stand in front of a mirror with a shirt buttoned all the way to the top and the collar up, put the tie around your neck. The thick end of the tie should be on the side of your dominant hand. So if you're right-handed, the wider end should be hanging on the right side. The wide end should hang down about twice as low as the thin end. The narrow side of the tie has a small seam in the front, move the thick end of the tie over the narrow end so they cross each other on the seam. Wrap the thick end behind the narrow end twice, a few inches below your neck. After wrapping the wide end around the second time, push it through the back of the V-shape made by the partially formed knot. Tuck the wide end through the front loop of the knot. Gently pull down on both the thin and wide ends below the knot until the knot is tight. Tighten the knot by sliding it up the narrow end. Make sure your tie is straight and the length is appropriate. The wide end should hang a bit lower than the thin end. If the thin end hangs below the wide end, untie the tie and begin again, and do the same if the wide end hangs too low (it should reach the bottom of the belt buckle). Flip your collar back down once the tie looks dapper. To make a dimple, hold the top blade on both edges and then pull it down gently until the top blade starts to tighten. A slight convex should appear close to the knot. Use your thumb and forefinger to press the bottom of the knot into a V-shape and the convex will deepen to form the dimple. To untie the necktie reverse the instructions, rather than pulling the thin end through to avoid stretching and prematurely wearing out the tie.

Instructions on how to tie a Bow tie: 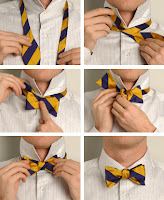 If you know how to tie shoe laces, you know how to tie a Bow tie, as it’s the same knot. Getting proficient on how to tie a bow tie requires practice and patience, but once you get it down it’s actually quite easy. Stand in front of the mirror, with the shirt buttoned all the way and the collar standing up. Drape the bow tie around the neck and under the collar and grasp the ends, with the end on the right extending about 1.5 inches lower than the end on the left ( if right handed- or reverse). Cross the longer end over the shorter end. Cross the tie near your neck so that the loop is just large enough to work with. You don’t want your bow dangling in front of your chest. Pass the longer end up through the loop (on the inside), forming a simple, loose overhand knot. Grasp the loose end (dangling at the bottom) and fold the end back to form a loop that is pinched between your thumb and index finger. Essentially, you want to double the right side of the tie over itself to make the loop. Hold this loop, which will be the front loop of the completed tie, between your shirt’s collar points. Drop the upper end of the tie over the front of the bow. Form a new loop with this end, just as you did with the first one. While still holding the loop you just made, double the end over itself. Position the new loop behind the front loop facing the opposite direction. Pinch the loops together with your thumb and push the second loop into the knot behind the front loop. The tip of the right index finger will be in position to push the end of this loop into the hole behind the front loop. On one side, the loop will be on the front. On the other, it will be on the back Tighten the knot by pulling the two loops together, and straighten the bow tie. To loosen or untie the bow, pull on the tails.

Posted by beautybyella at 11:42 AM