NEW YORK (Reuters) - After weeks of speculation, singer-actress Jennifer Lopez has confirmed that she is pregnant, People magazine reported on Thursday.

"Marc and I are expecting a baby," the 38-year-old performer told a concert audience in Miami on Wednesday night during the last stop on her joint North American tour with her husband, vocalist Marc Anthony.

After the announcement, Anthony shrugged his shoulders, caressed his wife's stomach, then leaned over and kissed her belly.

"I didn't know she was going to talk," he told the crowd.

"This is a special time in our lives," said New York-born Lopez, who has sold 17 million records worldwide and released six albums. "And we waited until the last show to tell you." 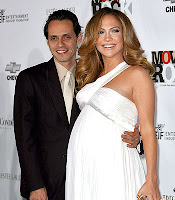 Lopez, who has been married three times, tied the knot with 39-year-old Anthony in 2004.

Fans of the singer started sending notes of congratulations to the star.
"Thanks for sharing with us your personal life. Congratulations!," wrote Glenda Santiago on Lopez's page on social networking site Facebook.

Posted by beautybyella at 6:26 PM