As far as beauty-history documents it, both women and men throughout the centuries, have worn makeup to enhance their features . In the ancient times, cosmetics were believed to have healing, magical and even spiritual powers.

The ancient Egyptian men, women and children of all ages and classes wore makeup. Eye paint was made from green

malachite, and galena (a gray lead ore). These were ground into a powder and mixed with oil to make eye color called Kohl, which was applied to the eyes with a small stick. Both the upper and lower eyelids were painted with black cosmetic liner that extended out to the sides of the face. Women wore foundation to lighten the face and men wore eye makeup to protect their eyes from the glare of the sun rays. Similar rituals were also followed by the ancient Roman and Greek civilization, especially with the use of perfumed oils. In the Middle Ages pale skin was a symbol of wealth and social ranking as well as light, sun-bleached hair and higher foreheads. As bathing also became an expensive commodity with the years, oiled perfumes continued to be the craze.
In the Renaissance, the skin continued to be very pale, they even bleached it, striving to have a porcelain complexion. Unfortunately, the common use of lead and other toxic agents made makeup a cause of serious illness and death; by the Elizabethan's times, as society women copied the queen's naturally pale complexion and red hair, using white powder in great abundance, along with red wigs, the death toll was the highest it had ever been. The most successful means for re-creating Elizabeth's pallor, unfortunately, was ceruse, or white lead, which was later discovered to be poisonous. Wigs also became very popular, because the use of chemicals to bleach the hair caused it to fall off. By the 1770s, the headdress became more and more elaborate: wigs, built over horsehair pads or wire cages and powdered with starch were all the rage. Some extended three feet tall with springs to help adjust the height. They were very extravagant, adorned with feathers, ribbons, jewels, and even ships and gardens; but since they needed lard to be constructed they attracted lice and worms.
In the Victorian era a natural beauty was advocated by the puritan belief, where women were restrained and without makeup. Middle- and upper-class women used less cosmetics, and more audacious colored makeup was only used by prostitutes and stage actresses. Women's hair became sleek and demure, smoothed down over the temples with long curls at the side and with a knot of curls in the back.
In the '20s women started to rebel, as they copied the early movie stars who brought up the standard of beauty. The new short "bob", and waved or shingled hairstyle symbolized the growing freedom of women, as did the heavy use of make up. They applied pale powder on the face and cream rouge circles to the cheeks, then tweezed their eyeb

rows and penciled in small thin arches; their lips were very red with emphasis on the upper bow of the lip.
The trends of the 1930's and '40s were also very much set by the movie starlets. More feminine, longer hair became more popular with soft curls that fell over the shoulders. Tanned skins, for the first time, started to take the place of pale complexions and to symbolize higher status.
The 1950s saw a comeback of values and traditions, where women became glamorous housewives; complexions returned to be pale and intensely colored lips and eyes became fashionable. Hair was teased, sculpted and sprayed at the beauty salon, where it got styled as a helmet of perfectly formed curls and waves. Men also followed the styles of movie stars like James Dean, and their hair went from slicked back to the D.A. (Duck's Ass).
In the 1960s women started to pursue careers and rebelled against the time-consuming coiffures of the previous years and wore their hair down with short or long cut and most o 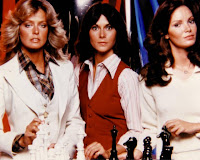 f the time very straight; Long hair also became all the rage with men with the advent of the "Beatles" and hippie movements. This style of long free hair also continued on in the 1970s, and make up was very natural up until the end of the decade, when Punk movement revolutionized it.
The 1980s were the "age of excess", where hair got big for men and women, and makeup was heavy and vibrant. The 1990s look was very subdued compared to the previous decade: hair took a flow, free and natural style, while make-up became dewy, as for the heroine-chic super-skinny look. The 2000s are the years of glowing skin, bronzed faces and light make-up. Hair extensions have brought back big, long, soft curls that cover the shoulders and celebrities still keep setting the beauty and fashion trends.
The use of cosmetics and hair styles have evolved throughout history. Even though, in the past the common use of ill or death causing ingredients started a lot of controversy, the cosmetic and beauty industry remains a multi-million dollar business, as people keep striving to achieve the perfect starlet-image dictated by their decade.

Posted by beautybyella at 4:26 PM