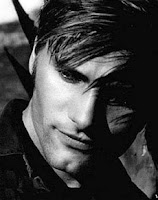 There a few actors in the Hollywood scene, who choose to remain true to themselves; they let their talent shine on the screen and do not rely exclusively on their -so admired- good looks.

I am extremely fashinated by such actors because they carry their sense of self in their daily fashion style and to the Red Carpet: these movie stars play with the glamour concept, showing a keen sense of humor.
There are way too many actors who take their role as a "Hot Babe" and "Sex Symbol" too seriously and, even choose movie roles based solely on their good looks; this is not the case with extremely talented actors such as Johnny Depp and Viggo Mortensen.
Who can forget the oversized 40's inspired suits that Johnny Depp sported on the Red Carpet?!
The new name on everyone mouth for his Red Carpet extravagances is Viggo Mortensen. There 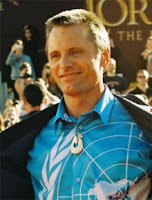 is no denying his good looks and charm, however he does not play many romantic Prince Charming roles!
Who can forget him as the incredibly dreamy Aragorn from Lord of the Rings!? Who kept the audience going back to the theater for the sequels.

The man is as talented as he is goodlooking, his latest movie earned him an Oscar nomination, even though I believe that many fashion "gurus" just wait to see what he will wear next. The Dane actor/poet has so much fun with his fashion that in the latest appearance at the Oscar's he even helped design his outfit.

Criticized by many, Viggo is misunderstood! It would be so easy to dress his lean and fit body in any designer tuxedo and get in any "Red Carpet Glamorous" lists, but I admire his courage to step outside the "black tuxedo" mold, and express his poetic/romantic side through his clothes. Unfortunately not many can see the humor in "not taking yourself too seriously"; only few people decide to step outside the "obvious-glamour-box", by expressing their emotions, literally, on their sleeves, and should be applauded for it. It's a puzzle to me how people might appreciate the wacky creations of some fashion designers, at an "over-the-top" haute couture fashion show and at the same time, the same critics, are ready to "crucify" a Movie Star for taking the same chances.

I often wonder if there are others -like me-who can see the romantic expressions behind some fashion creations, which sets these stars aside from the fashion disasters? Why is it so hard to see the clear difference between a "wanna-be-star" fashion mess-up and a stylish fashion statement? I see Viggo Mortensen as a "Statement Maker"- a funny guy who doesn't take himself too seriously- and the talented handsome person/movie star he is!

Posted by beautybyella at 8:44 AM

Great work! It's fun and educating and really appreciate the work you put into this blog. Shame on the people who think it's smart to market their websites on here.